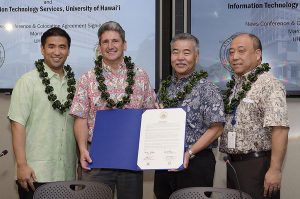 HONOLULU — Gov. David Y. Ige and University of Hawai‘i President David Lassner today announced an agreement that leverages the 2-year-old UH Information Technology (IT) Center to reduce risks associated with some of the state’s IT systems while saving taxpayer dollars.

Signed this morning at the UH IT Center, the formal memorandum of agreement (MOA) between the Office of Enterprise Technology Services, led by state Chief Information Officer (CIO) Todd Nacapuy, and the university’s Information Technology Services (ITS), led by UH Vice President for IT and CIO Garret T. Yoshimi, specifies the terms of the co-location agreement. Under the MOA, some IT systems currently housed at that state’s primary data center in the downtown Kalanimoku Building are migrating to the UH IT Center to the extent possible to provide resilient backup. The agreement outlines a rate structure under which ETS will remunerate the university for its costs each year, including a “true up” based on actual expenses from the previous year.

“I applaud our Executive Branch and University of Hawai‘i teams for working together on this mutually beneficial and cost-effective solution to meet our state’s immediate data center needs,” Gov. Ige said.

UH President Lassner noted that “the state has had IT facilities challenges for years, so when we were requesting state funding for the new IT Center we made clear our willingness to support other state programs as well. We are pleased to now welcome these state systems into vacant space in our LEED Gold data center facility.”

CIO Nacapuy added: “By leveraging the UH data center, we are able to address some of our most critical systems while reducing duplicative spending, including costs associated with designing, building, maintaining, powering and staffing an entirely new data center. This agreement represents an annual cost avoidance that’s easily in the millions.”

The Kalanimoku data center has long been known as an aging facility with many components requiring refurbishment and upgrades.

Physical security, access and reliability were key factors in identifying the UH IT Center as a viable site. The UH facility already maintains a secure environment with protocols in place for authorized personnel are provided access, and the UH IT Center’s data center is designed to operate through an extended power outage without any problems. In addition, under the MOA, the university agrees to put in place processes and procedures necessary for some state departments’ compliance obligations, such as those required by the Health Insurance Portability and Accountability Act (HIPAA), Internal Revenue Service, Criminal Justice Information Services, and personally identifiable information (PII) standards.

The UH IT Center was dedicated on Dec. 16, 2013, as the new home base for UH Information Technology Services staff. The 74,000-square-foot, six-story facility houses enterprise information and communications technology systems and services that support modern teaching, administration and research for all 10 UH campuses and students throughout the state. The building features a disaster-hardened, 8,000-square-foot data center for enterprise servers, storage and communications, high-quality space for faculty to develop digital content, meeting and training rooms with teleconferencing capabilities, modern workspaces for ITS staff, and an emergency situation room to support UH disaster response.