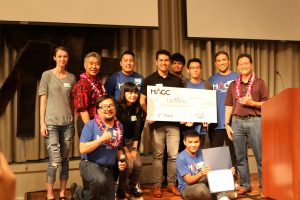 HONOLULU — “Wayfinding” was a winning theme as 20 community teams competed at the 2017 Hawaii Annual Code Challenge (HACC) Judging and Awards (a.k.a., “Demo Day”) last Saturday, Sept. 23, 2017, at East-West Center. A panel of judges led by Gov. David Y. Ige honored top teams for proofs-of-concept and prototype solutions, developed over the month-long state competition, that help individuals navigate the likes of a university campus, Hawaii state law, and even grant data.

“Whether they were winners or not, everyone who participated in the Hawaii Annual Code Challenge was part of improving how state government interacts with and serves the public,” said Gov. Ige, who welcomed participants to the event. “Innovation and the development of our local IT workforce is critical to making government more effective, efficient and open, now and in the future.” 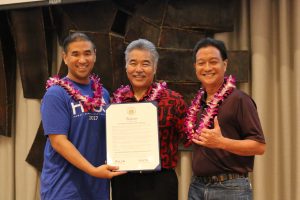 The HACC provides a venue for the state to work together with the tech community to improve how state government engages and serves the public, while also helping to develop the local IT workforce. Conceived by Gov. Ige, the HACC is coordinated by the Office of Enterprise Technology Services in partnership with the Hawaii Technology Development Corporation, local nonprofit Hawaii Open Data, DevLeague, and multiple state departments and agencies that will put forth challenges to community participants for identifying innovative ways to improve government services. For more information, visit: hacc.hawaii.gov