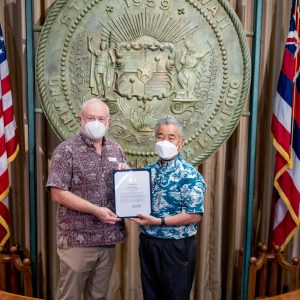 HONOLULU – Gov. Ige recognized State of Hawaii Chief Information Officer Doug Murdock for being awarded Statescoop GoldenGov: State Executive of the Year.  The award was given to the most influential people in state government across the nation.  Murdock was among many CIOs nominated for the honor.

More than 1,000 leaders and projects were nominated for various Statescoop awards.  Nominations were narrowed down to 180 finalists.  ETS’ Safe Travels Digital Platform was among the finalists for the Innovation Award category.  Voting was done on-line and more than 3.5 million votes were cast.  Winners were announced on May 1.